The evil genius of Amazon 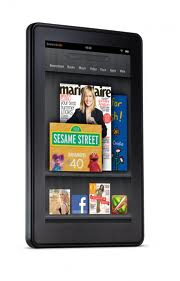 I got my Kindle Fire just over a week ago and it’s been like an introduction to a whole new world I never knew existed.

First, there’s the Fire itself. I’ve read all the reviews (good, bad and otherwise) and I just want to make something clear: all I was looking for was an e-book reader bigger than my iPhone (which I’ve been using with Kindle, Nook and assorted other apps). Paying the money for a tablet or an iPad seemed ridiculous; plus, I don’t like the size of the iPad for reading and that was my primary goal in acquiring a tablet or tablet-like device. That pretty much meant I was looking at the Kindle Fire or the Barnes and Noble Nook Color. My additional requirement was that the device allow me to load other e-reader apps. I want all my books in one place, not spread over several devices. When you’re about to spend a couple hundred (or more) dollars on something, I think it’s really important to really evaluate what you intend to do with it. I’ve already bought e-books at Amazon. My local library uses Amazon for most of its e-book lending. I was leaning toward the Kindle Fire.

There were some things that made me hesitate before I actually purchased the Fire. The biggest one was the lack of SD card slot.I had several arguments with myself over that one and decided that between the Amazon Cloud included with the Fire and the fact I could load files from my computer, it wasn’t that big of a deal to me. I had/have no intention of watching movies and TV shows on a 7-inch screen, so I’m not going to load the device with movies. I rarely listen to music, but should I feel the desire, I have it all on my iPhone already. I don’t want to surf the web on a 7-inch screen, either; if the Kindle Fire Silk web browser is slow, it’s no slower than Safari on the iPhone (at least in my experience). I use the web on my mobile devices only when I must. I don’t keep most books, paper or otherwise, after I read them. The memory built into the Fire is sufficient for me to store thousands of books, should I wish to do so. Therefore, the Kindle Fire seemed to fit my intended usage, and at the right price.

Well, then I got the Fire and discovered how truly evil those people at Amazon really are.

Let’s talk about the Amazon Prime service for a minute. I’d seen it at the Amazon site, kind of knew what it was, but never considered buying it. Why pay $79 a year for something? I didn’t need it.

Until Amazon gave me a month free with the Kindle Fire. That, folks, is the first step down Amazon’s Yellow Brick Road. Because, of course, since I have it and it’s free, I want to make the most of it. I already knew from an article I’d read (somewhere, I can’t remember where or I’d link to it) that Prime members spend more. It’s all that free shipping. Suddenly, you realize you don’t have to go to the store to do your shopping – you can have whatever you want delivered right to your house – in two days! Add to that the fact that Amazon’s most recent deal with the state of California means no sales tax (at least for another year). I can avoid crowds, have stuff delivered to my door AND not pay sales tax. All other things being equal (i.e., the price of the product being purchased),  it wouldn’t take long to save $79 just in sales tax.

But the Amazon evil doesn’t stop there! There’s the Kindle Owners’ Lending Library on top of that. Now, I’ve seen people pan this, but follow the thought process here. Yesterday, I discovered a book title I’d like to read. My first step is to check my local library’s e-books to see if it’s available (which it wasn’t). Then, I go to Smashwords to see if it’s available for download (which it wasn’t). My next step is Amazon. It was available for the Kindle at Amazon at a price of $8.99. Anyone who reads my blog knows I have a problem with some of the e-book pricing and this fell in that range. However, I did see a notification that the title was available in the Kindle Owners’ Lending Library (let’s just abbreviate that to KOLL). It took me a bit of help file reading to figure out how that worked. I fired up the Fire, went to the Books tab and then to the Shopping link, searched for the book and within minutes, it’s on my Kindle and I didn’t have to pay for it. For those of you unfamiliar with the KOLL, you can check out one title at a time, maximum one title per calendar month. You can keep a title as long as you’d like, but you cannot check out more titles. If I check out 10 books in a calendar year, all average price $8.99, I make up the cost of the Prime membership (the KOLL service is only available to Prime members), and then some.

Evil Amazon has hooked me and is now starting to reel me in. Until they gave me a free month of Prime service, I saw no benefit to paying that $79 a year to get it. Now, however, I’m starting to think it’s well worth the $79 a year.

As I said, I’m not going to be watching videos on this 7-inch screen. The Prime service includes a bunch of videos, which I’ve browsed through, but frankly that’s of little interest to me. And I have less interest in paying for videos to watch on a 7-inch screen. Just be aware that the videos included with the Prime service are only available for streaming, so you need a wifi connection to view them.

So, back to the Kindle Fire… For Mother’s Day last year, my daughter gave me a subscription to Better Homes & Gardens (print). I love magazines, but I have a hard time throwing them away and then they stack up and I’m trying to get rid of stuff, not accumulate it. Last night, I decided to see if I could get BH&G on my Kindle without paying extra. Sure enough, I could. I downloaded the BH&G app, entered my subscription info and lo and behold – I now have the magazine on my Kindle. The color is amazing, it’s much easier to find things (including recipes, my primary interest). Just for kicks and grins, I got the 90-day trial subscription to Bon Appetit. Bon Appetit apparently has no apps, so this subscription comes through to the Kindle Newsstand. The color is still fabulosu and the experience is very similar to the magazine. Unfortunately, that doesn’t translate really well in 7 inches. The BH&G app is much better, in my opinion. It will make it much easier to get rid of the paper magazine. (Oddly, it seems the BH&G paper subscription is cheaper than electronic only and it includes electronic delivery through the app.)

Amazon’s evil continues in the way they’ve integrated the shopping experience (at Amazon, of course) into the Fire. Almost every section includes a Shopping link. In addition, there’s the Amazon shopping app (just in case you’re shopping for something other than a download for your Kindle).

I love the Kindle Fire and now, thanks to the evil plans of Amazon to dominate my life, I suspect I will also be subscribing to Prime because I’m starting to wonder why I thought I didn’t need this service. Evil, I tell you – pure evil!