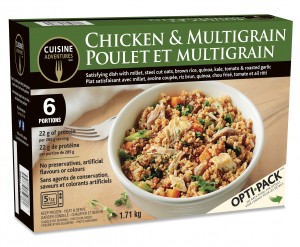 Quite some time ago, I bought Cuisine Adventures Chicken & Multigrain bowl from Costco. I was never able to find it there again, nor have I seen it anywhere else. I’m trying to eat more dark leafy greens, and this bowl contains kale. I’ve had issues liking kale. I know, I know – it’s popular, it’s all over the place. The only time I’ve eaten it and liked it was when I was at a restaurant, or with a dish prepared like the Cuisine Adventures (CA) one. (IOW, not something I prepared myself!)

Aside from the fact that this product apparently can’t be found anywhere, I’m all about home cooking. I confess – it’s mostly because I’m a control freak. When I cook something myself, I know what’s in it. I’m also cheap and home-cooked food can almost always be done for less than prepared foods. Did I think I could make something like the Cuisine Adventures multigrain bowl?

First, I found the product at the Cuisine Adventures website and took a look at the ingredients. Then, I did a search to look for recipes that included some of the main ingredients, got some ideas, and set about making my own Multigrain bowl.

Recipe below, but first let me explain some of the variations – things I didn’t use, things I did use, and changes I might make.

Where’s the chicken, you ask. For flexibility, I haven’t included it. When boneless, skinless chicken breasts are on sale, I buy a bunch and throw them in my crockpot to cook, then I weigh out 6-ounce portions, chop it up and freeze it. I can use it for a variety of things. However, I might decide to use a different animal protein; I’m thinking the Aidells Chicken & Apple sausage would be good sliced and heated in a skillet, then added to the multigrain mix. Or, I might decide to skip the animal protein altogether and just heat up the multigrain mix.

I also measured the grains separate from the seasoned kale mix, then I put them together. I felt measuring them separately allows a more even and accurate distribution of the calories. For me, the multigrains measured out almost exactly to 4 cups, so 1 cup per serving. I then distributed the seasoned kale mix evenly among the freezer bags.

In the entire recipe, the calorie count for just the multigrain mix is 686; divided into 4 servings, it’s 172 calories/serving. The seasoned kale mix is a total of 503 calories, or 126 calories/serving. If you want to reduce calories, use less olive oil, or find a substitute, or see how you do in the non-stick skillet without any oil. I don’t like to “go nekkid,” as it were, because the onions and garlic don’t seem to carmelize like they should, so it comes down to choices between taste/appearance and calories. If you omit the olive oil altogether, it’s 30 calories less per serving.

That’s a lot more calories than the CA recipe – more without the chicken than the CA per serving with the chicken. However, the serving size is a lot larger. I’ve found the low-calorie prepared foods have a very (very) small quantity of animal protein. Quite honestly, I found the single serving from CA to be inadequate all by itself. My bowl recipe is intended to be eaten as an entire meal by itself. Obviously, you could make serving size smaller if you don’t want to eat that many calories in one meal, or if you want to serve it as a side dish instead of an entree bowl.

OK, enough yammering – here’s the recipe, for anyone interested.

In a non-stick skillet, add a couple tablespoons olive oil. When hot, add onions and garlic. Add seasoning and saute until onion is translucent and garlic is fragrant and brown. Hopefully, that happens at the same time. Add tomatoes, carrots and any other vegetables you’re throwing in, and cook until liquid reduces, about 5-8 minutes.

Add kale and cook until kale is wilted and soft, about 4-5 minutes.

Remove this mixture from the skillet.

Add broth and grains to the skillet and simmer until grains are done.