The Solitary House by Lynn Shepherd 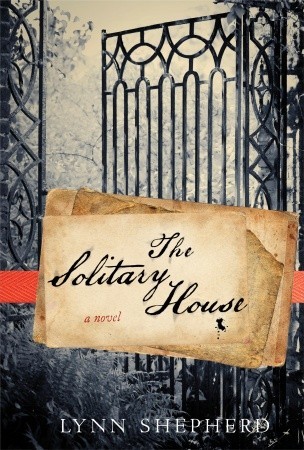 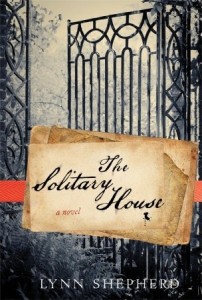 I got this book in an Advanced Read Copy giveaway at Goodreads and I am very glad I did. I’ve never read Dickens’ Bleak House (it’s been years since I read anything by Dickens, in fact), or anything by this author and I wouldn’t have picked it up otherwise.

I was (and am) a big fan of Sherlock Holmes, however. In junior high school, I read every Sherlock Holmes book in the library and now have the complete collection in hardback. This book is what I imagine would have been the result of a collaboration between Sir Arthur Conan Doyle and Charles Dickens. Yes, it was that good.

If you are acquainted with the mid-Victorian era through romance novels, you won’t recognize the London portrayed in The Solitary House. There are no fine ladies in elaborate gowns, no balls and parties, no large estates and great gobs of money to fund whatever lifestyle the characters wish to pursue. There are no fine gentlemen attending ladies as they shop for fripperies or walk through the gardens. In fact, reading this book, I wondered if there were any garden spots in London at that time! The London of The Solitary House is a London dank with fog filled with the gritty soot of a million charcoal fires; of mean, narrow streets filled with trash and running with sewage; of ragged children scavenging in the streets and a desperate population struggling to scrape together the means to buy food we wouldn’t feed to a dog. In this London, the thieves and cutpurses outnumber the constabulary in both number and viciousness brought about by sheer desperation. This is the London of Charles Dickens, and Shepherd does a fabulous job of bringing it alive.

In this London, Charles Maddox battles his own demons as he sets out to make his living as a private investigator after being fired from The Detective (the London police investigative unit, for us Yanks). I couldn’t help but like this young man; he’s sharp, but not too sharp for his own good. He isn’t perfect; he suffers from guilt over the disappearance of his sister on the streets of London when he was supposed to be watching over her, and he has a temper he makes only a moderate effort to control. He’s outspoken when it counts, and he feels strongly that Truth and Justice count. He is also dogged in his pursuit of them.

This story has more twists and turns and blind alleys than the slums of London. I had no idea where it was going or how it was going to end, but I thoroughly enjoyed being taken on this ride. I became almost anxious as I got closer to the end of the book, thinking surely the author will start tying up some of these loose ends soon! But the twists and turns kept coming. I felt as much in the dark as Charles seemed to be at times – only not as smart. It’s the kind of book you would consider reading twice just to see what clues you might have missed the first time around.

The Kindle version of this book is $12.99. If I hadn’t been given the ARC, I wouldn’t have bought it at that price but I can say, having read it, that I’d tell other readers to seriously consider it, or find it at the library if that’s outside your price range. I’m not going to give a price ding to the rating on this one because the quality of the story and the storytelling make it, in my opinion, worth the price.