Warning: fclose() expects parameter 1 to be resource, bool given in /home/customer/www/juliew8.com/public_html/wp-content/plugins/posts-by-tag/posts-by-tag.php on line 35
 Shemlan by Alexander McNabb – JulieW8 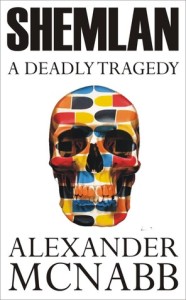 See also my reviews of other novels by this author: Olives – A Violent Romance and Beirut: An Explosive Thriller.

As I previously read and enjoyed books by this author, I was happy to say yes to his request for a review of Shemlan – A Deadly Tragedy. As usual, I was provided a free copy of the book, but made no promises and received no other consideration.

When McNabb includes words like “violent” and “deadly” in the title of his books, take it as a warning: his books are violent. People get blown up, tortured, and killed. Bad things happen to good people. Bad things happen to bad people. If you can’t handle that, don’t read these books. If you ignore the warning and read them anyway, don’t complain about the violence.

Fortunately for me, I don’t have a problem with violence, and I enjoyed these books immensely. McNabb crafts a masterful spy novel full of twists and turns, really bad bad guys and questionably good good guys. If you thought the spy novel died with the end of the Cold War, take heart and pick up these novels.

Gerald Lynch is back, and for a guy who has been declared by his agency to be physically inadequate to perform his job, he still manages to kick ass and take names. This story centers around the sad and clueless character of Jason Hartmoor, who attended the “British spy school” in Beirut before. After Beirut erupts in civil war and the school is closed, Hartmoor is placed on assignment thither and yon around the world. He’s a diplomat, that’s what happens. At the time this story takes place, Hartmoor is retired, and dying of cancer, He returns to Beirut for one final farewell to his past, and a woman he loved. His return stirs up old troubles and sets off a series of unexpected events. Gerald Lynch ends up right smack in the middle of the trouble. I have to say – for a dying man, Hartmoor certainly displays a strong will to live. Apparently, he would prefer to die as a proper Englishman should – at home, in his own bed. Lynch has to figure out who all the players are, while making sure the more deadly players don’t get their hands on Hartmoor. In the process, Lynch loses people who are precious to him, and the spy games become personal.

One thing I like about this series is McNabb doesn’t take the easy way out. It would too easy, given the setting in the Middle East, for the intrigue to center around terrorists and their plots. However, McNabb doesn’t take the easy path. Instead, readers get a wild ride through the Middle East and East Europe, and a glimpse at another kind of evil, the kind that can be found in any corner of the world. Each story delves deeper into Lynch’s character and while some of what we know about him might make us uncomfortable, he shines as the flawed hero of the story.

It helps to have read the prior novels in this series. This book does reference some of the people and story plots. However, in my opinion it isn’t absolutely necessary to do so in order to get the full impact of this story. But why wouldn’t you want to read them all? 🙂