Ghost in the Machine by Ed James 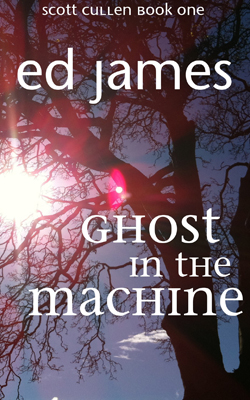 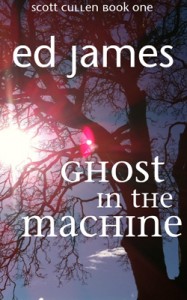 I was asked by the author to read and review this book.

This is the first in a series centering around Scott Cullen, a detective constable (DC) at Lothian and Borders. For us Yanks, that’s in Edinburgh, Scotland. It’s a good introduction to the character, a single man only recently promoted to the CID (Criminal Investigation Division) as a DC, who still lives with other singles in a shared flat. One thing I liked about this story is Scott’s co-workers are easily recognizable: the guy who puts his boot in your back while trying to ascend the ladder ahead of you, the guy you can’t ever seem to find when you need him but you suspect he’s not where he ought to be because he’s not doing what he’s supposed to be doing, the lazy ass whose work you never quite trust, the handful of people who are dedicated and whose work you can trust is done right; and, for Scott, the attractive woman who makes him feel a bit awkward. Top it off with the boss from hell and Scott has quite enough on his plate without the complication of a one-night stand with his ex-girlfriend’s flatmate, who seems to be under the impression they have something much more serious going on. You’ll also recognize Scott’s reaction from so many men you know (or, if you’re a man, possibly in yourself), because obviously he’s both puzzled by her assumptions and frightened by the hint of commitment to something more than casual sex.

This book also combines one of my favorite elements: technology. Apparently, the killer is using a local social network to meet these women and then kill them. There’s cell phone tracking, throwaway phones, IP tracing, scrounging through the private and proprietary databases of the social network (I’m wondering how long it would’ve taken to get permission to do that here in the U.S.), and something I’ve encountered in other stories based in the U.K. – surveillance cameras. For some reason, I find those cameras and their use endlessly fascinating, probably because here in the U.S. we’d find them a horrible invasion of our privacy.

There are plenty of twists and turns, more people disappearing, and more bodies turning up. DC Cullen relentless keeps pulling at threads, trying to unravel the identity of the murderer, while dealing with his DI, who has already picked his killer and just wants his team to find proof that he is, indeed, actually the murderer. It was a good read and the fact that I feel asleep while trying to finish it isn’t a reflection on the book itself, but on my desire to find out how it ended while ignoring the obvious signs of complete exhaustion!

I do admit that the local references, and the differences between the language spoken in Edinburgh and the language spoken in the United States slowed me down. While appearing to be the same language, I sometimes felt I was translating a foreign language, and there were bits that completely threw me for a loop. However, I don’t feel it detracts from the story. I’m sure someone who speaks the Edinburgh version of English will spend less time trying to figure some things out than I did, but I still recommend it for those of us who speak the US version of English. 🙂

Priced at $0.99, this book is a great deal. I’m looking forward to the next installment, and getting to know DC Scott Cullen and his co-workers better.