Warning: fclose() expects parameter 1 to be resource, bool given in /home/customer/www/juliew8.com/public_html/wp-content/plugins/posts-by-tag/posts-by-tag.php on line 35
 Tumbleweed by Heather Huffman – JulieW8 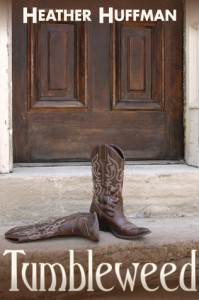 I received this book as an Advanced Read Copy in a Goodreads giveaway. This book is a prequel to Throwaway, which I haven’t read. It is apparently an introduction to the characters of Hailey and Ethan and how the Tumbleweed Ranch featured in Throwaway was started.

I didn’t love this book and I didn’t hate it. In my opinion, it skimmed the surface. Maybe I would’ve liked it better if I’d read Throwaway first, but I found this short (178 pages) book shallow and not interesting enough to get me to read the next book.

Hailey takes a job at a ranch in the Ozarks, where she feels at home among the horses. She is attracted to Ethan but doesn’t trust herself in relationships because she’s made poor choices in the past. There are problems with a neighbor. There’s a tornado, which destroys Hailey’s cabin, Ethan’s cabin and a large part of the main house. The owner throws in the towel. Hailey throws in the towel and returns to St. Louis with her son, having rejected Ethan’s proposal of marriage, still not trusting him or her choices of men. She lives with her parents, starts to (finally) pull her life together, has some meaningful discussions with her parents and returns to the Ozarks, now engaged to marry Ethan and partner with him to start the Tumbleweeds ranch.

Here are some problems I had with the story…

The character of the neighbor and the story behind the problems with him is never developed to the point where the character or the situation provides any tension, nor does it feel real. If the purpose of that part of the story was to build tension, it failed. If it wasn’t the purpose, I don’t know why it was there because it really didn’t add anything to the story.

Hailey doesn’t accept Ethan’s proposal when they’re both living on the same property, but after months of separation then she accepts it? Not to mention the brief amount of time these two knew each other before she returned to St. Louis. Maybe Hailey’s poor choices in men were due to inadequate courtships.

This book isn’t billed as “Christian lit,” but there is a lot of Godliness here. Not that I have a problem with Christian lit, I just choose not to read it and if it’s going to be a part of a story, I’d like some warning.

All in all, I’m lukewarm about this book. The Kindle book is also a lukewarm price at $2.99. I find it a bit much for what amounts to half a book but it’s a heck of a lot more reasonable than the paperback, which is $9.95.