Warning: fclose() expects parameter 1 to be resource, bool given in /home/customer/www/juliew8.com/public_html/wp-content/plugins/posts-by-tag/posts-by-tag.php on line 35
 A Danger to Himself and Others by J.E. Fishman – JulieW8 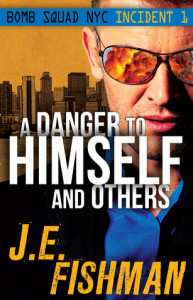 Title: A Danger to Himself and Others
Author: J.E. Fishman
Available from: Amazon

I received a copy of this book in exchange for an unbiased review. No other consideration was received or expected.

I finished this book with an overall impression of meh. I felt it was competently written and well researched. Unfortunately, I can only describe this as explosive if I’m referring to the actual bomb explosions, and not the plot or the storytelling. This was no thrill ride, no edge-of-the-seat-what’s-going-to-happen next. The story is mostly a plod through to the end, kind of picking up to a slow jog at times, but never taking off at a full, breathless run.

In the author’s note, the author acknowledges that nobody wants to read about policemen filling out forms, but this felt like just one step above that. I kept waiting for the flu epidemic sweeping through the department to have some bearing on the story. Tick, tick, tick – it didn’t. So why spend so much time on it? It didn’t move the story forward, and it didn’t contribute to the character development (unless you count the details of Capobianco’s gastric distress as character development).

The characterizations felt shallow to me, like everyone was a cardboard cutout going through motions. For me, a novel has to have either strong characterizations (in which case I can forgive story flaws) or a non-stop story that overcomes the lack of characterization. This had neither. Actually, the character I found most interesting was Salinowsky, the drug-addled homeless veteran. I never connected with Manny. I thought he was mildly interesting, but not compelling and not strong enough to carry the entire story. I found all interactions between Manny Diaz and his roommate, Jennifer, uncomfortable and awkward, as if even the author wasn’t comfortable with their relationship. On top of that, I didn’t feel the relationship added anything to Manny’s character, and it certainly didn’t do anything for the overall story. If anything, it slowed it down even more. The whole thing felt like a throw-away. If it was meant to “sex up” the story, it failed.

Overall, reading this first in a series doesn’t leave me wanting to run out and read the rest of the books. It was a quick and easy read; and, with the exception of the whole Manny/Jennifer thing, relatively painless so it’s not a waste of $0.99 as long as you don’t expect a lot from it.