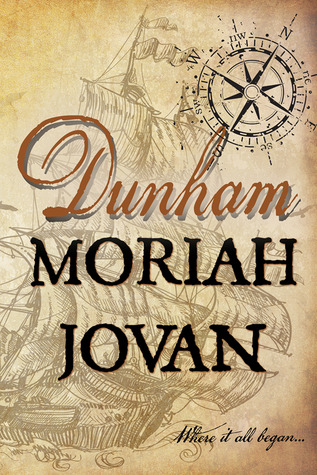 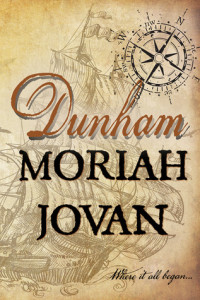 Pick up Dunham and forget about all the high seas pirate romance novels you’ve ever read. There is no feisty female thrust into the arms and at the mercy  of a handsome pirate. Oh yes – there is a feisty female, but she doesn’t need a pirate, handsome or otherwise, to rescue her. She is the pirate. Dunham starts with a mutiny and a beheading, led by Captain “Calico” Jack, known in the ballrooms of London as Celia Bancroft. She’s nothing you’d expect from the heroine of a romance novel. Then again, I’ve never expected run-of-the-mill romance from Moriah Jovan.

As Captain Jack swaggers her way through a Caribbean tavern, Captain Judas Iscariot mistakes her for a whore and steals a kiss. She might enjoy it, but she cannot allow it in front of her peers, and a brawl ensues. He steals the figurehead from her ship, a lusty, bare-breasted likeness of herself, that he refits to his own ship, then pursues her to continue the promise he found in her kiss. And the game is on. Subterfuge, romance and an American revolution take them from the ports of the Caribbean and Boston to the ballrooms of London and the courts of Spain. They fight each other, they fight side by side, and they love as fiercely as they fight.

As is typical of a Moriah Jovan novel, there’s nothing simple about this story and its characters; there are always unexpected depths in a Jovan novel. Celia and Elliott are embarking on both a literal and a figurative journey of exploration and Jovan takes the reader along, gradually exposing secrets and enticing us to love Celia and Elliott, cheer their successes and cry for their pain. Although Celia is lusty and lives life to its fullest, she has secrets and heartache that she conceals. For me, Elliott’s pain is even more deep, and he has reason to bury it even deeper. In many ways, he is a broken man, and in Celia, he finds someone with the strength to hold him together. In these two characters, we see the glimpses of familial traits bestowed upon subsequent Dunhams – Giselle, Knox, and Sebastian.

Just by way of full disclosure, Dunham contains violence (as would be expected of pirates) and explicit sex.

I usually classify a book a really good read when I laugh, cry, can’t stop turning pages and can’t stop thinking of the story. It’s taken me months to write this review because I wanted to make sure my review adequately conveyed how good this story is, and how much I enjoy the characters Jovan brings to life. I could read the whole book again tomorrow. I want to follow Celia and Elliott and watch the entire Dunham clan grow. I want to know each and every one of them because I’m certain their lives will be full of adventure.