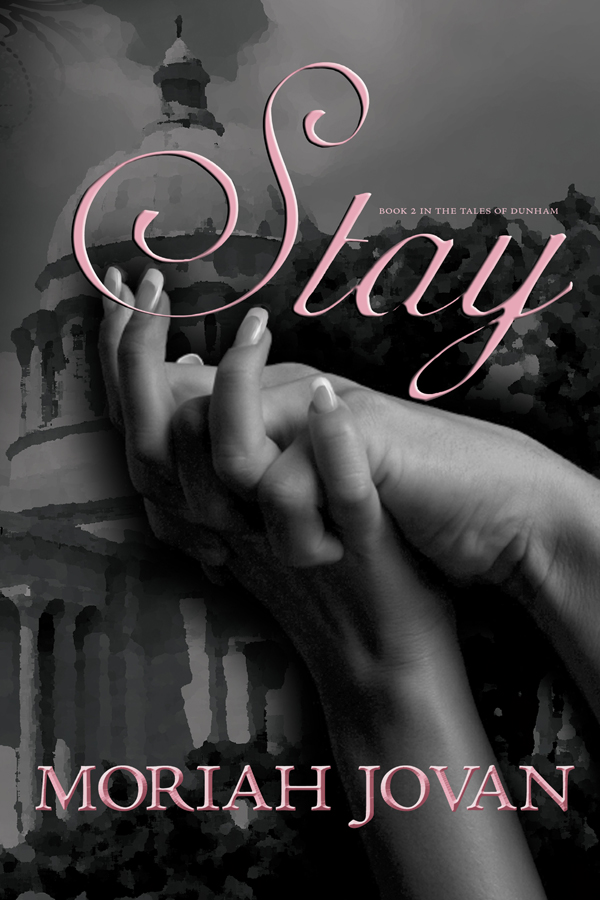 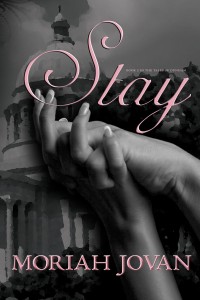 Most people who know me know that I’m a voracious reader, crossing all genres. I tend to go through phases, where I will read (for example) sci-fi and nothing but sci-fi; then I get over that and I read adventure, and nothing but adventure. Every book I ever read from “Oprah’s list” nearly put me to sleep or so disappointed me I wondered if disliking a book Oprah was gushing about meant I’m a shallow reader. Anyway, I tell you that so you know where I’m coming from when I say what I’m going to say next.

Stay by Moriah Jovan is one of the best books I’ve ever read. Ever, not recently – ever.

This is the second book in what is known as the Tales of Dunham series by Moriah Jovan. The first was The Proviso, which I reviewed then accidentally lost in a database deletion here at my blog. Never fear, however – Moriah saved it at The Proviso website. Follow that link and scroll all the way down to the end if you want to read it.

You don’t have to read The Proviso before you read Stay. Some of the characters overlap, but Jovan has done a wonderful job of letting the characters from one enter into the next book without the need to read the first book. Oh, you might want to go back and read The Proviso anyway because you’re going to fall in love with Knox (don’t worry – everyone does, apparently), so you’re going to want to know more about him – and The Proviso is his story. But it isn’t essential before you read Stay.

Here’s what I liked most about The Proviso – the characters. And that goes ten times over for Stay because now those characters are combined with a much better (in my opinion) story line and writing. Not that the writing in The Proviso is bad – it’s good – but Stay is better. Again, my opinion. Because I don’t want to give away any of the story, I’m going to mostly talk about the characters and the setting and the writing. If you want to know what the story is about – get the book and read it!

When you read Jovan’s books, you just know these characters are like real people to her. She knows them like she knows her own family. Actually, she knows them better than her own family, since she knows their motives and what they’re thinking. If you get her talking about them, you’ll forget that they are just the imaginary people who live in her head. She makes them real, however and wherever she presents them. And because of that, she also agonizes over their lives – to the point where sometimes it seems like she forgets that she’s the one in charge of their lives! All of this familiarity and love for these people comes out in the writing and the story. Because she believes in them, you will start to believe in them. She writes the characters and the stories so well that you, the reader, will become wrapped up in their lives and care deeply about what is going to happen to them.

Finishing this book brought back the same feeling I had when I finished the third book in George R. R. Martin’s “A Song of Ice and Fire” series – and I realized it wasn’t just a trilogy, as I had thought (hell, he’s just getting started!). I literally  screamed with frustration. I didn’t scream when I finished Stay, but I came close to it! I was so completely drawn into the story and the characters and their lives, I felt impatient when it ended. But… but… what happens next? what about these other characters? what happens to them? You finish Stay not only wanting to know if you will pick up more of Eric and Vanessa’s stories in subsequent Tales of Dunham, but NOW you also want to know about all the other characters that were introduced! Jovan demonstrates her mastery of the admonition always leave them wanting more. The worst part of it is, we have to wait until April 2011 before the next in the Dunham series will be published. I may be re-reading Stay a couple more times, to tide me over! And by the way, if you mosey on over to the Proviso website, you will find a bonus in the Dirty Little Secrets section. If you want something to tide you over until the next book, satisfy yourself with getting even more character background – these are freebies that tell some of the back story of the characters.

What I really like about the story is that there’s no subterfuge or manipulation of the reader. In most many stories involving romantic relationships, the conflict between the two romantic characters is artificially (IMO) created by a “misunderstanding.” Which is why I stopped reading most romances – that “misunderstanding” and manipulation of the reader really gets old and tiring. Stay is not a typical romance. Eric and Vanessa, our two romantic characters, have no misunderstanding about why they aren’t together – can’t be together. Those reasons are very clear from the beginning, as soon as grown-up Eric and grown-up Vanessa meet and fall in love. I like it because it makes me feel like Jovan understands that adults are reading this book. (Given the sex, I sure hope only adults are reading this book!)

But don’t dismiss this as “just a romance,” and don’t skip it because you “don’t read romance.” If Jovan writes “romance,” then it’s romance like nothing you’ve ever read. Her books don’t neatly fill into the “romance” slot. Yes, they involve romance and romantic love, but Jovan is very deep and she writes very deep. Her characters are multilayered and her stories are multilayered and it all goes deeper than and is entwined with the romantic aspects of the story.

OK, I brought it up – I’ll talk about the sex. There’s much less of it than in The Proviso. I admit that the sex in The Proviso nearly tired me out, just reading it. It’s there in Stay, but (for me, at least) it was less emotionally exhausting to read it. Probably this says less about the sex in Stay than it does about the difference in the characters and their backgrounds – those Dunhams are stormy, emotional and physical people! Eric and Vanessa aren’t Tribe members by blood, only by inclusion. Eric and Vanessa are healthy, sexually active young adults, so there’s no doubt (other than the fact that this is a romance story) that there will be sex, but it’s also clear that Eric and Vanessa lead busy lives outside the bedroom. (Raise your hand if you’ve never fallen asleep during sex. Yeah, that’s what I thought!) The sex is erotic, tender, touching. It will make you laugh and cry, which is good.

I also like that Jovan sets her stories in a location we typically wouldn’t see. I mean c’mon – how many stories have you read that were set in Kansas City? Yeah, that’s what I thought! In much the same way that Jovan knows and loves her characters, which brings them to life on the pages of her books, she also knows and loves the Kansas City area. Read this story and then come back here and tell me if you don’t think someday there are going to be Tales of Dunham tours going on all over the Kansas City area, with side trips down to the Ozarks. You heard it here first, folks! (She used to have some fabulous pictures of KC on one of the web sites but I couldn’t find them – maybe she’ll come comment and provide a link, if they’re still there.)

As you can probably tell (was I gushing?) – I loved everything about this book. If this represents the kind of growth we can expect to see with each new book by Jovan, it’s going to be exciting to watch her and it’s going to be a joy to continue to read her books.

Disclaimer: I didn’t get paid to write this review nor do I make any money if you go order it. But I am going to tell you – go order it! NOW! There’s no accounting for taste but I’m pretty sure mine is pretty mainstream, so I’m going to go out on a limb and tell you that you won’t regret it. Now, if you click on that “Song of Ice and Fire” link and go to Amazon and buy something, then I get paid as an Amazon affiliate – just letting you know. But I have read those books at least twice now and they’re cheap at twice the price if you like sci-fi sagas and court intrigue.

One thought on “Stay (Moriah Jovan)”