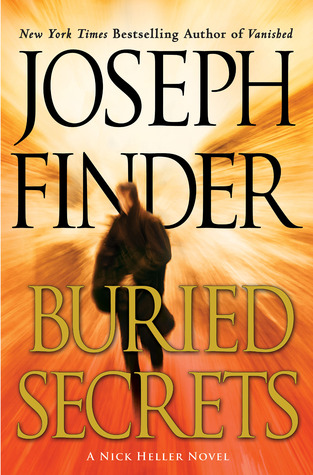 This is my first Joseph Finder book and it won’t be my last.

I was particularly interested in the way the author switches between Nick Heller’s point of view (POV) in the first person and the omniscient POV. I’d recently been reading Lawrence Block’s comments on how to do this well and Joseph Finder does it well. He uses Nick’s POV to keep certain things from the reader, things only Nick knows that contribute to the twists and turns the story takes. He uses the omniscient POV to show the reader what we need to know (without giving anything away).

I found I liked Nick Heller. Frankly, I get tired of main (usually male) characters in these types of thrillers whose abilities and breadth of knowledge border on superhero or superhuman status. I found Heller refreshing because not only does he not leap tall buildings in a single bound, he knows he can’t.

If you’re addicted to the mile-a-minute thriller that moves at a nonstop pace and leaves you breathless from start to finish, you’ll likely be disappointed with this one. I was thoroughly hooked through the first third of the book because it’s an interesting story and the characters are interesting. By the time I reached the middle, I was a little more anxious to see how it ended. I couldn’t put it down by the time I got to the last third of the book and steadfastly ignored everything around me until I finished – at which point I was a little breathless.

This book pretty much has everything. There’s a problem to solve and the clock is ticking. If it doesn’t get solved, an innocent child will die. There’s a little romance. For my book, you can’t go wrong with Russian bad guys, and international financial shenanigans. Toss in a few government agencies with acronyms like CIA and FBI, plus a couple old army pals who know how to GTD and what’s not to like? (Where would thriller fiction be without ex-military characters?)

Again, I’m going to have to be careful about not spoiling the story, but I will say that by the time you reach the last third of the book, you realize that Nick is going to have to work some magic because none of the many people who owe him favors or with whom he is willing to exchange favors are going to be able to help him bring this to a successful conclusion. By this time, you know who the bad guy is – and that even the people who think they control him actually can’t. In fact, at this point, almost everything is out on the table for the reader and only two real mysteries remain: (1) can Nick rescue the girl in time and (2) what the hell is really going on?

This book is just under 400 pages, so I felt the author could have developed the undercurrent of the story a little more. I’m still a little confused about the financial shenanigans in the story. I think if Finder had gone into more depth and given the reader a better understanding of the motive, it would have enhanced the story, but it’s not necessary to my reading enjoyment. When I read, I like a good plot and characters I can connect with, and this book delivers those. The bad guy is very, very bad and the good guy is just good enough. 🙂 I would like to see Finder develop his secondary characters a little more, as well, and hopefully he’ll do that as this series progresses.

I haven’t read the first Nick Heller story, but I probably will – and look forward to more from this author. I’d especially like to see more development of the kind of quirky characters that populate Nick Heller’s universe.