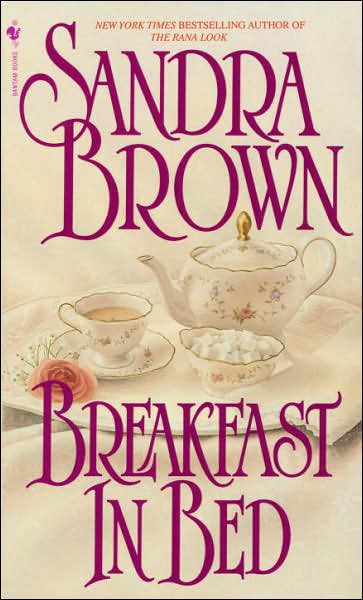 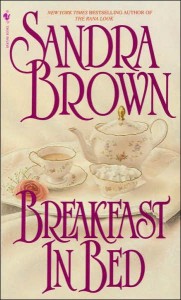 Title: Breakfast in Bed
Author: Sandra Brown
Available from: You really don’t want to know. No, really – you don’t.

I’ll preface my review of this book by saying that when I enter a book giveaway at Goodreads, I feel a responsibility to write a review, which means finishing the book. That is, after all, the primary reason for authors and publishers giving away their books. Well, I couldn’t finish this book. I made it to page 45 and I just couldn’t make myself go any further.

I have to wonder what Sandra Brown was thinking when she decided to give away this book. First of all, it’s a really old book, published in 1983. The book that was given away has an older cover than the one you see here. It’s almost like she found this box of books in storage somewhere and decided this would be a good way to get rid of them – get some marketing buzz AND get rid of these old books that are taking up space! Great idea! I got a signed copy of the book, an audio disk of another book and a nice bookmarker.

The problem is that this book is a stinker, in my opinion. If Sandra Brown’s intent was to show readers that she’s improved significantly over the past 18 years, then goal accomplished! All I can say is thank God I was already a fan of Sandra Brown’s before I started reading this. If this had been my first Sandra Brown book, I would’ve thrown it across the room and swore off ever reading anything written by her.

Where do I start? In 45 pages, I determined that both the main characters are weak. I hate weak characters. The story is thin and contrived, which only magnifies the weakness of the characters. Set the clock back to 1983 and the dated feel just served to jerk me out of whatever suspended belief I’d managed to work up in between pages – and believe me, I worked hard to suspend belief to get through 45 pages of this story.

My first problem with the story was the setting. Carter goes to Sloan’s bed and breakfast ostensibly to get away from distractions so he can finish his book. This bed and breakfast is off Union Square in San Francisco. Of all the places a person can go to get solitude, downtown San Francisco wouldn’t even make the list. It’s not quiet, it’s not isolated and it’s definitely not a location that gives off a vibe of solitude. It reads like Sandra Brown has never actually been to San Francisco. I’ve stayed in downtown San Francisco, off Union Square even, and believe me – it’s not somewhere you go for peace and quiet.

My second problem with the story is that Sloan lets her best friend, Alicia, send her fiance to stay at her bed and breakfast, in spite of the fact that she has a policy about not taking single men. Why? Because her best friend asked! And she needs the money! Now, 1983 was a long time ago for all of us but if I remember right, there was a little more judgment about single men and women staying under the same roof. I’m not sure I remember that judgment extended to innkeepers – but whatever. All this story line does is highlight that Sloan was right to have this policy, because the minute Carter arrives on her doorstep, she starts getting aroused. I don’t know about anyone else, but if I’m worried enough about money that I’m willing to break a self-imposed cardinal rule, I’d be on my best behavior. But here, Sloan’s weakness as a character shines through. She allows Carter to draw her into one situation after another that throws them together.

And probably the biggest problem I have is how both these characters seem to completely forget the person between them – Carter’s fiance and Sloan’s best friend. It was kind of icky, to tell the truth. Even ickier is that it seems to be excused by the fact that Carter is marrying Alicia because her late husband was his best friend and he apparently feels some sense of duty to take care of the widow and children. But he doesn’t really love her. OK, that’s icky enough, but when you add it to the underlying current of the attraction between Carter and Sloan, it’s stomach churning. I had to wonder – if Carter and Alicia were already married, would the fact that he doesn’t really have feelings for her give him an excuse to have an affair? It reads more like  a tutorial on what to tell your mistress than a romance.

All in all, 45 pages of this book was a waste of time. Finishing the book would’ve added insult to injury. Sandra Brown is better off sticking with romantic mysteries. And if she finds a box of old books in storage somewhere, they’re better off thrown away.