Thailand: The process of elimination

When considering writing on this topic, I tried to approach it without being squeamish or delicate, because elimination is something everyone does, I found it difficult, maybe because I grew up in a generation that was squeamish about any bodily function and didn’t discuss any of them unless with family members or someone with MD initials after their name. Perhaps I can handle the topic with the avoidance of TMI.

Isn’t immersing yourself in cultural differences one of the reasons for traveling to far-away places? I have unfortunately demonstrated my inability to successfully execute being polite and respectful; I might as well expose my bumbling with the process of elimination, as well. 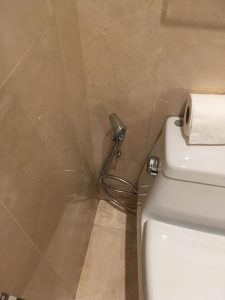 When I first saw this, I thought it was the local version of a bidet. Yeah, I took a picture of it! And it is, kind of/sort of a bidet. I mistakenly thought its use was optional. If there was a sign anywhere at the Renaissance – as there is almost everywhere else we went – indicating that toilet paper is not to be flushed, I missed it. My belated apologies to the Thai sewage system and any problems it might have caused. Apparently, the system isn’t equipped to handle anything but the actual waste. When I first saw the signs, I thought don’t flush paper? Do they really mean that? Yes, they do. Almost every toilet (I’ll get to the ones that are the exception) has one of these hoses next to it. My son calls them “butt washers.” It’s an accurate term for the purpose of these things. The idea is to hose yourself down so that when you use toilet paper (and you will need to use it), there isn’t much um…. left. Because the toilet paper goes in the trash, not the toilet. Really, the toilet paper is meant for drying.

You can be thankful you aren’t the person who will be emptying the trash; I know I was.

This was not an unpleasant experience, since I wasn’t the one emptying the trash. It made me wonder how much it would cost to install a bidet in my own home, and what my husband might say about it.

No, no – by far the most unpleasant part was the squat toilets. Thankfully, I only encountered these twice. And in my cultural defense, I talked with some people who had lived in and/or traveled extensively in regions where squat toilets were the only option and they admitted they never quite mastered the art. Since I’m unable to overcome my upbringing, there are articles – with pictures – on how to use a squat toilet. This won’t be one of them, with or without pictures.

This is a typical (in my brief experience) squat toilet. Which demonstrates the other phenomenon I encountered: the flush basin. I didn’t need to figure that one out because I used a similar method myself when we had no water for three days after the Northridge earthquake. In Thailand, some toilets have a basin of water next to the toilet (or somewhere close to the toilet), and a handled scoop. Instead of flushing, you just pour water into the bowl until it’s clean.

You notice how I’m avoiding discussing the actual use of the squat toilet? However, I only saw these toilets when we were driving to/from Bangkok and Kamphaeng Phet (a 4.5 hour drive) and stopped for gas, water and toileting. In both cases, there was neither water hose (aka butt washer) nor toilet paper. Apparently, these are bring-your-own-paper toilets, and/or you use the scoop and your hand to direct water where it needs to go and get clean. (One article points out that this method has been used by European royalty. In the past, I presume.) I’m going to hope that washing of hands is a given here. Thankfully, my prayers were answered and I only needed to use these to pee, which is probably more information than anyone wants about these things. At one stop, the bathroom had thrones on one side, squats on the other. Like a coward, I chose the familiarity of the throne.

You will also see signs in “throne rooms” that show the silhouette of a person squatting on the throne, with the red circle and slash indicating u r doing it wrong. Apparently, some people are as unfamiliar with the use of thrones as I was with the use of squats. So, culturally we’re even.