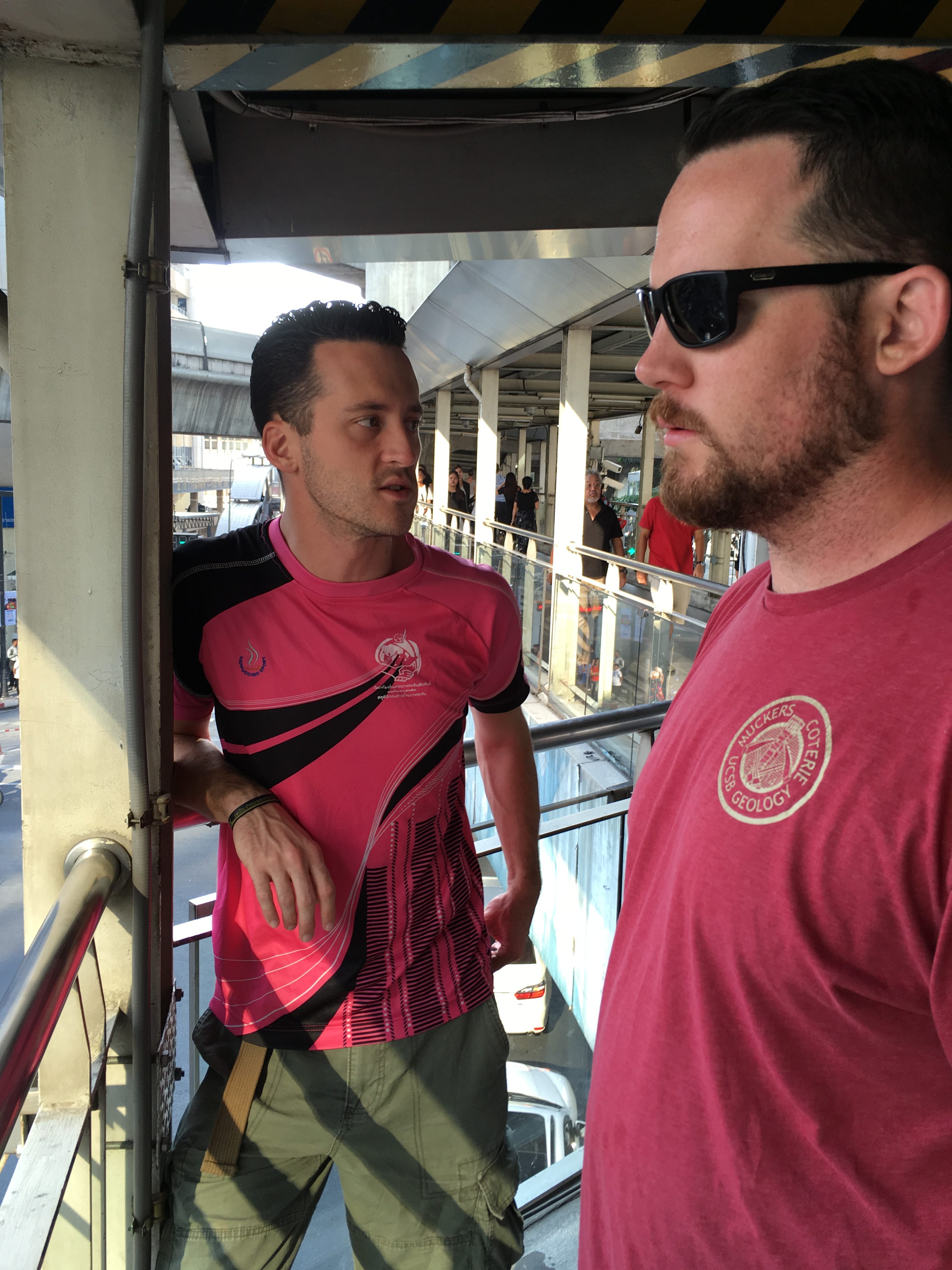 I’d just like to note, for the record, that if the pictures I post here don’t include all my children, it’s because some of them (or all of them at times, or any mix of the three) can be darn uncooperative about spontaneous photography. For example, after arriving in Bangkok and checking into the hotel, we went for a walk to explore the downtown area, with the plan of eventually heading to a street market for dinner. We were in the Sky Bridge by the hotel when I snapped some pictures of the three kids as they walked ahead of me. My daughter turned around and admonished me not to take pictures of her ass. So I took one specifically of her ass. Since I enjoy a good relationship with her, which I’d like to continue, I won’t post it publicly; I maintain it only for my own amusement. That said, there’s Will and Nolan, my two young men. Will is the reason we’re in Thailand. This is the first time I’ve seen him in over a year. No amount of texting or voice calls or video chats substitutes for being able to give him a big hug! He’s working and living in Thailand for at least another year.

Just a word (or two) about Thailand: hot, humid. Oh my goodness, is it ever. I knew that going in but when you aren’t accustomed to that kind of weather, I’m not sure there’s anything that prepares you for it. I quickly learned that showering a couple times a day and changing clothes is the norm. Otherwise, you’d be sweaty and sticky all the time. Will tells me that malls are very popular in the more urban areas because they’re kept cold (like, freezing cold), although there were a few malls where the interior areas leading to the shops were open air. While malls here in Los Angeles seem to be gasping for relevance and customers, the malls in Bangkok were huge and full of people.

The Sky Bridges are open air, but the purpose is apparently to keep foot traffic off the street. As you can see, there’s a lot of traffic. Apparently, traffic regulations are mostly a suggestion. If you get into a taxi (or a tuk tuk), just don’t watch what the driver is doing – you don’t want to know. A popular method of navigation appears to be hogging two lanes at once so the option to change lanes goes unchallenged by other drivers. Really, you’ll go crazy if you watch. The motor scooters are everywhere and you see passengers riding side-saddle behind the driver. Some motor scooters are for hire, distinguished by a bright vest they wear. Taxis operate on a slightly different basis than what we’re accustomed to in the U.S., and the price of the ride is negotiated up front. The entire time I was in Thailand, I think I only saw two instances where tips were solicited; apparently, it’s not a thing in Thailand. We took a taxi from the airport and I asked Will if we were to tip the driver. The driver, who apparently understood more English than I had supposed, said “no,” at the same time Will did. 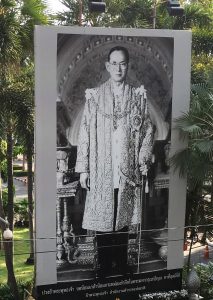 Thailand is still in mourning for King Bhumibol, who died last October. Everywhere you go, you see memorials, large and small, and many businesses and buildings are draped with black and white swags of material, with black rosettes. This is a picture of the very large memorial outside the Royal Thailand Police Headquarters in Bangkok, as viewed from the Sky Walk. The mourning period will last a year, and many government workers still wear black to show their respect to their monarch, who was the world’s longest-serving head of state (over 70 years). Thailand is well known for enforcing lèse majesté laws and visitors need to be aware of that; when in Thailand, be sure to show respect for the monarchy (and, to be safe, the government) and don’t voice any criticism.

I was so tired from the trip, I’m not even sure I exactly remember what we saw. We met a friend of Will’s, who works in a hair salon in a mall in Bangkok. In spite of my (initial) belief that I needed to do some walking around after sitting on an airplane for way too many hours, the walk from the mall to the public transportation station that we needed to take to the street market was way too much for me. I did a lot of whining and I’m not ashamed to admit it! The train, however, was a memorable experience. It was rush hour and to say it was crowded is an understatement. Not only did we wait for a couple of trains before we could get on, everyone jams into the car. This is not the place to be claustrophobic, or shy about proximity to the people around you. I swear the only thing holding me up was the crowd.

The street markets are interesting, and not something you see much in the U.S., even in big cities. Well, not in Los Angeles, anyway. For one thing, I’m pretty sure every structure in the place would blow over in a good Santa Ana wind, or topple quickly in what we consider to be a small earthquake. The market is huge, with a lot of variety.

Will made it clear before we left for this trip that we would have plenty of time to eat Thai food while there, but when we were in Bangkok, he wanted Western food. He doesn’t get it very often, and it isn’t readily available where he lives. So what did we eat that first night? Thai food. But it was interesting Thai food! This is apparently a popular dish there because we had it again another night in Kamphaeng Phet, where Will lives. There is a hot plate on the table and the staff places a large pot of hot broth on it and turns up the heat. I never figured out what was in the broth. It’s seasoned, but clear. They then bring the standard plates of additives; after that, if you want more, you can order specific items. You throw everything, or just what you want, into the pot and wait a few minutes for it to heat up, then start dishing it out and eating. If you eat everything and want more, you order more. If you need more broth, they bring more broth.

See the bottled water? Drink lots and lots of water, you’re going to need it! There wasn’t much in the dish that surprised me, with the exception of morning glory stalks and leaves. My first thought was that’s a weed. Well, apparently yes – and in Thailand it grows like a weed, which they eat. My second thought was it can’t taste worse than kale, which I also consider weed-like. And like kale, it’s leafy and green. I am going to give food its own post at a later date, and I’ll go into more detail about the quirks and commonalities of the food I ate and the food that’s available. But yeah – I still maintain that kale is a weed, so why not eat morning glory.

After taking the train back to the stop closest to the hotel, I stumbled to our room, took a quick shower, and went to bed. I had to catch up on a lot of sleep.

I’m going to have a lot to say about hotels, so I’ll just mention the Renaissance in Bangkok because it was not an experience like any of the other places we stayed. I got a terrific deal on rooms there because of a family member and it’s probably the nicest hotel I’ve ever stayed in. They treated us like royalty. I was there to go and do and see; otherwise, I would have been sorely tempted to just hang out at the hotel all day. We got an upgrade to Executive Club, which allowed us to eat, drink and hang out in the Executive Club lounge, where there was breakfast, high tea, and cocktails at various times of the day. This is the one (and only) place we stayed that I can highly recommend if you’re going to Bangkok, even if you won’t get a deal like the one I got.