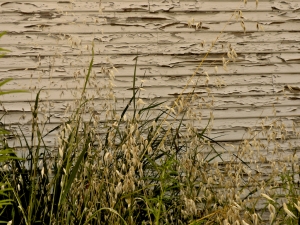 My husband and I own a house that we rent out. I recently had a tenant move out suddenly (that’s a different and long story, highlighting the joys of being a landlord). Although I had a pretty sizable deposit, they didn’t give notice and so I didn’t get last month’s rent and I’m not too optimistic about getting any further money out of them for (a) repairs and (b) rent due as part of the lease agreement. On top of that, there were things that needed fixing that weren’t related to their tenancy. So, I decided to be cheap and do a lot of the work myself. How hard could it be, right?

Up to a point, not too hard. There were a few false starts, like when I tried to spray paint the metal stair bannister. (Just not practical when you’re trying to hang off the second floor to get the far side of the bannister.) I’m sure a professional painter could have done it, but I gave up and used a brush and roller. After getting up close and personal with the work done by prior painters, I decided whatever I did probably wasn’t any worse.

Then, I decided to do the cabinets in the kitchen. It’s been several years since they were painted. The last tenant was really rough on the lower cabinets around the sink and stove top area, so I started there. I decided if it was just too much, I’d hire someone to do the rest.

There were a few challenges. Apparently, I’m the first painter to actually remove the cabinets and hinges. Everyone else just painted over them, including the original contractor. Therefore, the screw heads were filled with paint. Some came out fairly easily; otherwise, I was banging paint out of the screw head just so I could get good contact with the screwdriver. I also neglected to bring anything to set the cabinet doors on while I painted them, so I was painting them while they were flat on the floor. I’m far too old and fat to be crawling around on a tile floor. It also made it difficult to get the edges just right. I’m also the first painter to actually paint ALL the edges. Apparently, professional painters don’t feel it’s necessary to paint edges that they don’t think will be seen, like the bottom edges.

I survived the experience and the paint job didn’t look terrible. (No worse than any professional painter’s work, in my opinion, and at least all the edges were now painted.) It took almost nightly recovery sessions in the jacuzzi and a fair amount of ibuprofen, but I survived.

Rehanging the cabinet doors is another thing entirely. I thought I’d just take the new hinges, which are exactly the same as the old hinges (only white, so nobody feels the need to paint over them again), screw them all back in and I’d be good to go.

My first problem arose when I had to hang two doors that are supposed to meet in the middle. It’s harder than I thought. This is where I realized my limitations – I’ll paint, but I’m going to have a handyman come hang all the cabinet fronts back up again.

All in all, however, that first section turned out looking really nice. I decided I could handle the rest of the paint job. I got some moving boxes that were stored in my garage and set them up so I had platforms to put the doors on while I paint them. Not quite professional, but it works.

So, I informed my husband that I’m going to go ahead and paint all the cabinets. I mentioned that the upper cabinets were going to be harder and I’d need a step stool. He said, “Just be careful you don’t fall and hurt yourself.”

Touched at his concern, I replied, “Awww – are you worried about me hurting myself while I’m all alone in that house?”

“No,” he said. “I’m worried that the medical bill will be more than it would cost to just pay someone else to do it.”

I’m pretty sure he wasn’t trying to be funny.