Warning: fclose() expects parameter 1 to be resource, bool given in /home/customer/www/juliew8.com/public_html/wp-content/plugins/posts-by-tag/posts-by-tag.php on line 35
 The Proving (Tom Szollosi) – JulieW8 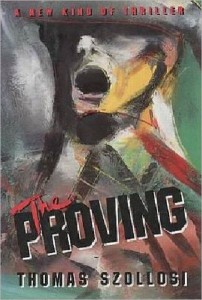 Here’s another book by Thomas (Tom) Szollosi and here I am asking again: why hasn’t this been made into a movie? (Hello, Hollywood! Jeffrey Dean Morgan to play Husky Martin, please!) I’m also going to hope Tom has plans to make this into a series because Husky Martin is a great character and I’d hate to see him begin and end in just one reading. Besides, the ending of this book just sits up and begs for a followup sequel.

I want to know how much time Szollosi’s spent driving around Los Angeles. I don’t know if Tilly Taco’s is a real place, but Szollosi sure makes it sound like one. And if it is – how the hell does he know about it? This isn’t the sort of knowledge you’d expect from your average Angeleno but in the pivotal action that takes place there, you’ll feel like you know exactly what it looks like or that you’ve driven past it a dozen times.

Like The Space He Filled, I couldn’t put this book down, and I actually liked it better. The Proving reminds me a bit of Dean Koontz or Stephen King (think The Green Mile). It’s a story you might have read many times before, but suddenly the author throws a kink into the reality that moves the story to another dimension. What I especially like about Szollosi’s writing is the way he uses words. He has a unique way of writing that makes me want to highlight phrases throughout the book because I’d like to write like that. I’m envious, really. He also weaves the story and the characters together well. Every character has importance, every event has meaning; it’s descriptive and I totally connected with the story, but Szollosi is a tight writer and everything that happens is for the purpose of drawing in the reader and moving the story to the conclusion. And in my opinion, that’s a skill more writers should master.

Szollosi characterizes Edgar Lamp as a serial killer, but not a lot of time is spent on the psychology of serial killers or profiling because the book starts with the end of Lamp’s trial in Los Angeles and transfer for another trial in Texas. Lamp is not your run-of-the-mill killer: Edgar Lamp is a bad, bad man. I’ll leave it at that – if you want to know more, read the book!