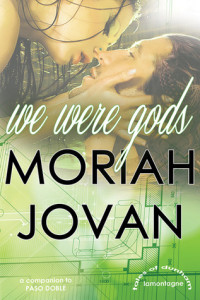 I just want to note for the sake of anyone reading my review that I consumed vast quantities of romance throughout the years. I loved it. I still sometimes (occasionally) do. However, I tired of the cookie-cutter formula writing that permeates popular romance.

Moriah Jovan does not write cookie-cutter formula romance. And I love her for it.

We Were Gods is a companion to the also newly released Paso Doble – which I will read and review next. Like all of Jovan’s Dunham novels, it stands alone – but why wouldn’t you want to read the others and get to know The Pack better?? 🙂

Indeed, The Pack is back, although the focus here is on Étienne and Tess. He’s French. She’s Korean. They’re both brilliant. LaMontagne2, working in tandem, designing and building.

And therein lies the crux of the story. What broke LaMontagne2? How and why did Tess become Molly Mormon, a woman Étienne  would never have married? They are a delightful, quirky, dramatic, noisy, messy couple with delightful, quirky, dramatic, noisy children and life. They have matching tattoos. She wears a ring in her nose and crazy colored streaks in her hair. She jingles when she walks. He has long hair and braids and wears leathers. In the church I went to in Logan, Utah, if this family had walked into the chapel for a service, the old ladies would’ve gasped and moved their purses from the seat next to them, to be tightly clutched in their lap. Mothers would have grabbed their toddler’s hands and pulled them far, far away. I would’ve loved every minute of it! And yet, here’s Tess, wearing twin sets and not dying her hair and removing her nose ring and covering her tattoos and faithfully discharging her housewifely and churchly duties – and not creating anything. She’s dying inside and in denial about it. And the LaMontagne marriage is crumbling, their family along with it.

There’s a lot to love about a Moriah Jovan novel and for me, the first thing I love is the characters. They’re real to her, and she makes them real to the reader. They aren’t neat and tidy and normal. Jovan understands perfectly that normal is just a setting on the dryer and what she gives the reader is a look behind the facade most families put up so they look normal. What’s revealed is the messiness, the personality quirks, and above all, the issues we all experience because we live with other imperfect humans (or, in many cases, humans we view as less perfect than ourselves). It’s delightful, because of course I recognize at least one person from my own life in the Dunham pack. (Is she peeking behind MY curtain?)

My favorite in this story is Étienne , because “God loves him best.” His self-absorbed personality would make him an unsympathetic character if Jovan didn’t make it so funny. Aside from that, I found his faith deep and moving. I almost felt like going back to church! His faith and how he practices it made him a more believable character, in my opinion. The Pack is LDS (Mormon), but Jovan doesn’t hit the readers over the head with it, or preach – it’s their religious practice and belief in the same way characters in other books are Catholic or agnostic or… whatever. It is part of who and what they are and what has shaped them, and it’s a part of Étienne’s character, portrayed at a very emotional level. His interactions with The Pack are delightful, his love for his children moving, and how he deals with his grandchildren is hilarious, including his reluctance to be called “Grandpa.”