Too Dark to Sleep by Dianne Gallagher 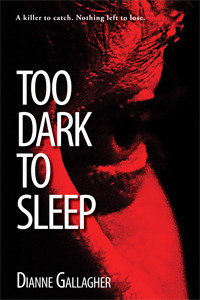 I was given a copy of this book for free in exchange for an honest review.

This story has an unlikely character in the darkness. It creeps, reaches out, smirks and giggles as it tries to overcome Maggie and drag her back down into its depths. It becomes the lead character in the psychological warfare that has become Maggie Quinn’s life.

A once-brilliant detective in Chicago’s Area One, Maggie succumbed to the darkness after the death of her only child and only the chase to find a serial killer motivates her to resist its advances.

This is a noir thriller with great depth of character. There’s broken Maggie, struggling to come back to life and finally put a face on the killer that haunts her dreams. There’s her father, who showed his loyalty to The Outfit by taking a fall that landed him in prison for life, where his loyalty is rewarded with influence. There’s Rayney, who understands Maggie like nobody else and knows he needs to be strong if she’s going to come back from the pit of darkness. There’s Nick Dublowski, newly made detective, who has a lot to learn and finds his best mentor in the broken Maggie. There’s a killer, playing games with Maggie and her already screwed up head, but Maggie gives as good as she gets as she pulls away from the darkness to strike back.

I was on the edge of my seat. I was totally confused and I loved it. Was Maggie right about the killer? Who would win the war? Could Maggie hold herself together and push back the darkness long enough to solve it? I even gasped in surprise a couple of times.

By the time I finished, I felt washed in Maggie’s darkness. There’s no real redemption in this story, but that’s okay; nobody is looking for redemption. I felt I knew Maggie as much as anybody could know her, and I felt her pain.

Sink into the darkness with Maggie. It’s an uncomfortable place to be, but I couldn’t put it down.