The Last Policeman by Ben Winters 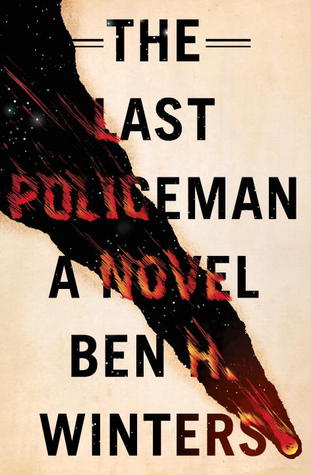 I won this book in a Goodreads giveaway.

I’m a sucker for an end-of-the-world scenario, or post-apocalyptic story so the pleasure I found reading this book is probably biased. It’s probably the most subtle one I’ve ever read, choosing to focus instead on Det. Hank Palace. That this murder mystery takes place in a pre-apocalyptic scenario only serves to make it more interesting.

The setting, the story and the characters all come together and I found it hard to put this book down. It raises a lot of questions about human nature – and yet, there’s Hank Palace slogging through the ennui, the uncertainty and the complete breakdown of society, just doing his job because he doesn’t know what else to do, and he likes doing his job. It made me start to wonder if I’d be able to do the same thing.

How would you spot a murder in a setting where people are committing suicide in record numbers? That Hank Palace does is only the first unusual thing about him; that he cares enough to solve a murder when most of the population of the earth is going to be wiped out in six months is the second unusual thing about him. Hank, however, seems to find nothing unusual about it, and it made me like him even more.

I highly recommend this book. I found it to be a fascinating read with a strong central character and a story line with an unusual twist.