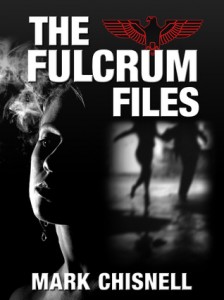 I never would’ve discovered Mark Chisnell’s writing if it my friend hadn’t talked me into getting an e-reader, which I did. I then discovered Smashwords and free e-books. After slogging through some real dreck, I picked up The Defector. I was blown away. I found Mark on Twitter and asked why he was giving away such a quality read. I mean – I know I complain about e-book prices, but The Defector and it’s sequel, The Wrecking Crew are too good to be free. (They aren’t any more, but they’re still worth more than their current price.) So thank goodness for e-books!

So I was thrilled when Mark asked me if I would read and review The Fulcrum Files. I knew I was in for a good read.

This book is nothing like the other two but don’t take that statement wrong. It proves there’s a lot of depth and range in Mark’s writing. The story, set in the 1930s as the Nazis rise to power in Germany, starts by introducing us to Ben Clayton as a young boxer and then moves relentlessly and steadily into murder and intrigue as Ben’s friend, Stanley Arbethwaite, is killed while they’re working together on a racing yacht. Ben’s boxing experiences shape his attitude about another war so close on the heels of the first World War, yet he unwittingly becomes the fulcrum for political intrigue and spy games.

Chisnell’s characters are always complex and well developed. The political intrigues behind the characters double the fun and Chisnell keeps the reader guessing right up to the end – who’s lying? who’s working for whom? Who is the murderer? The only thing I was sure of was that it wasn’t Ben Clayton. Ben’s life just gets more complicated after the death of Stanley when Mrs. Arbethwaite discovers bills that haven’t been paid for months and faces foreclosure of her home, where Ben is a boarder. He just gets drawn further into the intrigue when he attempts to find out what happened to Arbethwaite’s money, and who might have killed him. And he never sees the political tug of war that he’s involved in without any clue as to what’s actually going on.

I like that Chisnell’s stories take place around and on the water and in the lives of the people who work and live there. I know nothing about that kind of life, but Chisnell brings it life. The way he weaves that life into the story and uses it to build tension just makes the story that much better.

Even better, Chisnell’s done an excellent job of portraying historical events of the time and the tensions in Europe over Hitler’s aggression.

This isn’t a mile-a-minute psychological thriller like The Defector and The Wrecking Crew but it’s still a really good story, and told well. As I read it, I was tempted to compare it to the other two books but I couldn’t really – it’s a very different kind of story. If you haven’t already read anything by Chisnell, my suggestion is that you read this one first. You’ll enjoy it thoroughly but won’t be comparing it to the other two. Then, read the other two. If you’ve already read Chisnell, don’t skip this one – it’s still as good – but in a different way.