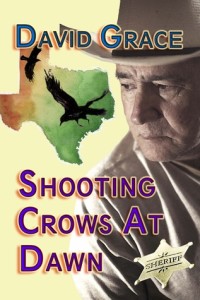 The author sent me a free copy of this book and requested a review.

This book starts out strong and never lets up. Jubal Dark, sheriff of Francine County, Texas, is one of the best characters I’ve read in some time, and Carl Alvin Spence, an escaped convict, and Buck Nevin, a Texas Ranger, are first-rate counterparts. Added to the great characters is the compelling landscape, as the chase for Spence takes the reader through the back roads of rural Texas. As I read the book, I felt like I was in familiar country with people I knew. I’d love to see more Jubal Dark stories.

Jubal Dark is a compelling but simple man. He misses his wife, Annabelle, who has been dead for four years. For two years, he has been haunted by his failure to find the killer of a local woman, Carol Railsback. He’s getting old and fat. He’s up for re-election and his nemesis, Buck Nevin, has convinced a Houston homicide detective to run against him. Jubal wants to keep his job as sheriff, but maybe there’s something inside him that believes he doesn’t deserve it because he hasn’t found Carol Railback’s killer. And then Spence inserts himself into the mix. Sheriff Dark was the man who originally brought Spence to justice, and four years later, escaped from prison, Spence is out for revenge before he heads off to Mexico. With his two accomplices, Spence breaks into Dark’s house – and finds only his dog. And you know what happens in Texas when you kill a man’s dog. Killing the dog is only the beginning of the bloody trail left behind by this trio. Spence and his fellow escapees move on, stopping at the home of a local man, his wife and two children, then killing them all before moving on. Spence makes sure the killing happens in Sheriff Dark’s county, just in case Dark doesn’t already know what Spence thinks of him.

Jubal Dark now has a burning passion for justice and he intends to get his man, in spite of Buck Nevin, jurisdictional issues, or his re-election against a candidate who says he’s too fat, too old, and too old-fashioned to stay in office. Jubal doesn’t have time to campaign; as far as he’s concerned, catching Spence is his campaign. And if he can solve the case of Carol Railsback, he can retire satisfied that he did his job.

This is a fantastic story, and the author tells it well. Go grab this book and join Jubal Dark as he tears up Texas!