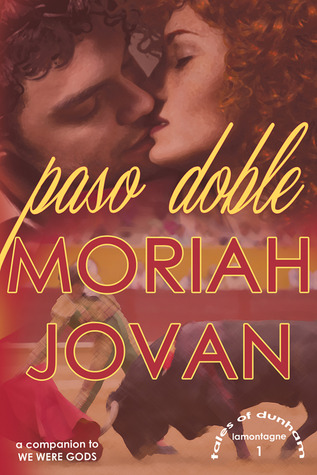 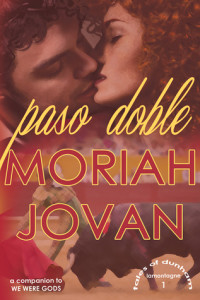 When I pick up a Moriah Jovan title, I expect to read a complex romantic story with deep rivers running below the surface. I expect characters that engaging, complicated, frustrating, and lovable. In all these respects, Paso Doble does not disappoint. Jovan just keeps getting better and better (which is to be expected); in the pantheon of the Dunhams, this book sits a little higher than the others.

I am impressed with the amount of research Jovan has put into the last couple of titles. In Paso Doble, she takes the reader to Spain and the world of bullfighting as if she had lived there herself and thrown kisses and roses at the toreadors.

Jovan doesn’t write Romance (with a capital R). She writes epic stories that are romantic. The central theme is love: finding it, recognizing it, realizing it, and keeping it. And not just love with a member of the opposite sex, but love for ourselves, family, and friends. Like I said – deep rivers. The characters, in some respects, could be viewed as being somewhat over the top (beautiful, brilliant, accomplished), but they are all notched by trials, tribulations and flaws. Besides, who wants to read a book about ordinary people? As much as I might bemoan that romantic fiction (mostly, but not exclusively) is packed with characters who are beautiful, brilliant and (mostly) wealthy, my hypocrisy is exposed when I read – and love – these kinds of stories. Apparently, I don’t want to read about ordinary people, either.

I think Emilio is probably the most well-adjusted, just generally happy character Jovan has ever written. He’s not completely without problems, and he’s not a blissful idiot, but he takes his problems in stride, finds happiness in every corner, and has a generally affable nature. He knows who he is, and he’s comfortable with himself. He’s also a torero with a Ph.D. in chemistry, and he has more than a little bit of reputation with the ladies. I was falling in love with him before Victoria did.

Quite by accident (or is it?), Emilio bumps into Victoria, who happens to be one of the many Dunham cousins of his bestie, Sebastian Taight (le sigh). And twin sister to Etienne LaMontagne, whom we meet in We Were Gods. She’s a professor at Covarrubias University (if you’ve read Dunham, you’ll understand the connection). Victoria is beautiful and she knows it. As a devout, unmarried Mormon, she’s also a 32-year-old virgin. Jovan’s characterization of Victoria is charming and deep. She exposes what many of us don’t realize when we see someone beautiful, and that is that beauty comes with its own set of problems. Victoria’s beauty is flawed by her personality traits. Like her brother, Etienne, Victoria has autistic traits, which make her socially awkward and very literal. She says things most people would filter. She finds the mundane aspects of life difficult to handle. She has nearly given up on finding a man who sees her as something more than a prize, an object of desire, and who can tolerate her lack of social awareness and tendency to say exactly what she thinks.

As soon as Emilio and Victoria meet, the real paso doble begins. Sexual tension is so palpable in this story, it’s almost another character in the book. I think in our (mostly) sexually liberated society, we’ve forgotten how erotic abstinence can be. She is certain this manslut wants what every other man has wanted from her, and that’s not a long-term relationship. He finds her charming, desirable – and frustrating. Yes, he desires her, but he’s no dummy and it doesn’t take him long to realize he must pursue his goal with patience. Somehow, the conquest becomes a courtship as these two play out their own dance in tandem with Emilio’s dance for Victoria in the bullfighting ring.

I laughed. I started casting the movie in my head. I cried. I laughed some more. I started searching IMDB because, sadly, Antonio Banderas is too old to play Emilio. I’m quite certain Jovan has already cast the movie. I cried some more. The final bullfight – yes, over the top and hopelessly romantic – left me gasping in delight. And what happens after that? You’ll have to read the book, because I’m not telling. 🙂