Fire in the Blood by Ed James 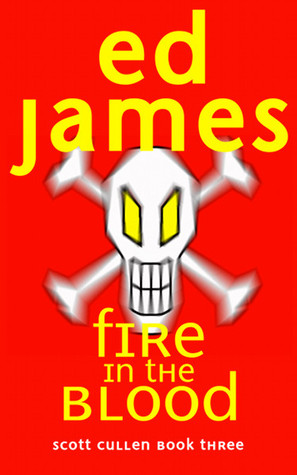 I’m always happy to read and review one of Ed James’ Scott Cullen mysteries. I confess the title of Ghost in the Machine kind of threw me for a loop and I wondered WTH I was getting in for. I almost turned him down. Once I started reading, the title no longer mattered and I was glad to be introduced to this series. I also confess that when Ed asked if I would review Fire in the Blood and sent it along to me, I dropped all the other books on my list in favor of reading this one first. Once I find an author I like, I will read everything they write and now Ed’s on that list. Frankly, I was relieved to pick up a book I actually knew I’d like before I even started reading it.

Writing a series allows an author to really develop characters and setting; if the job is done right, reading a book in a good series will be like curling up on your sofa with a bunch of old friends, ready for the next adventure. I like series and I really like this series.

When I read a murder mystery, a lot of the fun (for me) is to try and guess who the killer is before it’s revealed and I give high points if I can’t guess. This one had me as baffled throughout as the previous two – which is, of course, the whole point. It helps that the characters are familiar, because there’s a lot going on. The author continues to add depth to Cullen while fleshing out the story with secondary and minor characters.

What better place to hide a body than in a whiskey barrel that nobody’s going to open for years? Scott Cullen has a lot on his plate with this case, including his usual conflicts with Bain and pending changes in the police department. To further confuse things, two young men who could fit the description of the body disappeared at approximately the same time as the barrel was sealed. By the time the body is finally conclusively identified, Cullen’s list of possible suspects is getting rather lengthy. Cullen’s running a marathon to solve the case while taking flack from Bain. By the time I was 30% into the book, I could hardly put it down, and the ending had me biting my nails.

If you haven’t read the other books in this series, you should – not because this book can’t stand alone, but because you’re missing out on a good read. Or – read this book and you’ll go back and read the other two.