Last Call for the Living by Peter Farris 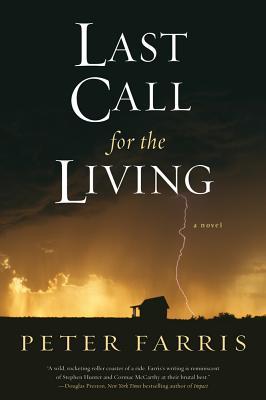 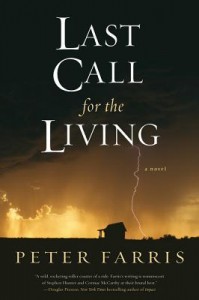 I received an Advanced Read Copy of this book in a Goodreads giveaway.

The good first: I couldn’t put this book down. I read it in one day. From the minute Hobe Hicklin changes Charlie Colquitt’s life forever, to the very end where Charlie begins to live the changes instigated by these events, this book is an attention grabber. It winds through the dark world of the prison system, the Aryan Brotherhood and the stark brutality of stone cold killers who exploit others without guilt or remorse. The juxtaposition of hapless, naive Charlie, thrown into this world by circumstances beyond his control, serves to highlight the amorality of Hicklin and his brothers. The past is deftly woven into the present, deftly telling a backstory that adds to the psychological thrill of the story.

Although there are a lot of loose ends left, in my opinion they didn’t spoil the basic telling of the story. The brief introduction of the “travel teller,” revealing part of the plot in an interview with GBI Special Agent Crews, doesn’t go anywhere beyond that. The purpose of the introduction, apparently, is only to reveal how the scores are set up. The author never reveals why Hicklin jumped the score – kind of an important point, since he knew it would set the Brotherhood against him. Hicklin himself can’t explain why he abducted Charlie when he robbed the bank or why he drags him along, keeping him captive for days, in spite of his apparent uselessness in the situation. I really didn’t buy the one event that sent Sheriff Lang into a downward spiral of alcoholism that cost him his family and self respect, but felt it was incidental to the story itself – and the story itself was strong enough to carry through the weak points.

My favorite part? The buildup to the scene in the church. I could feel the tension, wondering where the story was going, because it seemed unrelated to what was happening with Charlie and Hicklin, but feeling like I was right there in the church with the worshipers and then with Charlie, Hicklin and Lang.

This is not a book for the faint-hearted. The author doesn’t pull punches with respect to the brutality of the prison system or the Aryan Brotherhood. If you can’t tolerate torture, excessive use of drugs, rape, racism, and killing, don’t read it. This story details the worst aspects of human nature. I occasionally felt somewhat sick to my stomach, but I kept reading.

The characters are very well done. The only character I felt was under developed was Special Agent Crews. Otherwise, the author does a really great job of conveying the nature of the main characters and a couple secondary characters. I felt the changes occurring in Charlie. When he thinks to himself that he wants to kill Hicklin and Hummingbird, I felt connected with him and the changes that were beginning to take place in him as a result of his experience. For Charlie, this is a dark coming-of-age story. Hicklin himself is a dark study in the career criminal.

OK, the bad… I’m seeing more and more debut novels riddled with incomplete sentences. I’m not quite sure why – I suspect the authors think this style of writing “punches it up.” Or something. I find it gimmicky, annoying and it frequently makes reading difficult. More than once, I had to go back and reread an entire paragraph, piecing together the sentences in my mind, in order to make sense of it. Who decided this gimmick was a great idea? I’m trying to picture writing groups or classes where someone says if you make entire paragraphs of nothing but incomplete sentences, it really punches it up! In my opinion, occasional and infrequent use of incomplete sentences may draw attention to a point, or “punch it up.” However, paragraphs of incomplete sentences sprinkled liberally throughout a novel are just tiresome and difficult to follow. There’s a reason for grammar and punctuation – it facilitates communication and understanding. I think an author needs to consider whether the gimmick is worth the degradation in communication. Obviously, I was able to overlook it (for the most part) because I finished the book and I enjoyed it – but it still annoyed me throughout.

The title: what is the title about? I’m not sure where it comes from, and it doesn’t tell me anything about the story. I wouldn’t pick up this book based strictly on the title.

Last but not least, the price. At the time of this review, this book is available on preorder. The Kindle price is $11.99, the paperback is $13.91. It’s typical pricing for a “publisher” novel; i.e., overpriced in my opinion. It’s a really good read but if it wasn’t available in my local library, I would pass it up for other good reads that are more reasonably priced.