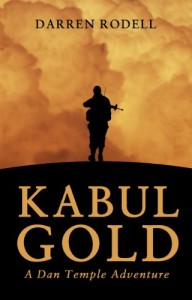 Even though this book is priced higher ($2.99)  than what I would usually be willing to pay for a new author/first book, I took a chance because the author claims inspiration from some of my favorite authors: Lee Child, Wilbur Smith and Clive Cussler.

I desperately wanted to like this book. Instead, I found myself desperately trying to keep reading to the end. By the time I got through the first half of the book, I was ready to give up. I felt the story was dragging and I’d highlighted numerous problem areas where I found the writing confusing and the story muddled. I kept reading and the writing did improve and the story picked up a bit. It was easier to finish the second half than it was to get through the first half, but I’m not giving a ringing endorsement to either the second half, or the entire book. In other words, the improvement wasn’t a fantastic one.

This book has one of the worst characters I’ve encountered in a long time, in the form of Caroline, Dan Temple’s girlfriend. Rodell’s characterization of this woman is schizophrenic. She sits meekly in a car while her kidnapper paces about outside the car. Why? Because he locked the doors! She’s not even tied up. Maybe I’m missing something about how a Range Rover operates, but here in the U.S., if you lock the doors, someone inside can still get out of the car. Her kidnapper then apparently takes a nap in the car, while she sits quietly in the back seat – still not tied up in any way – presumably watching him rest while he kills 15 hours. I say presumably because after a brief verbal exchange that ends with Caroline slumping into silence, nothing more is said about her. And yet, later in the book, there is a reference to Caroline making sarcastic comments and playing mind games with her kidnapper. We only have the author’s word on this; up to this point, Caroline has been portrayed as weak and submissive. For crying out loud – she sat in a locked car and did absolutely nothing to attempt an escape but we’re supposed to believe she’s a spitfire with no more evidence than the author’s say-so to support the assertion.

On top of the schizophrenic portrayal of this woman, I found the character poorly written and extremely unlikeable. By the time the story ended, I was kind of wishing she’d come to some harm. Killing her off and having Daniel take vengeance for her death would’ve been far more interesting than the character and her involvement in the story. If Mr. Rodell can’t write female characters better than this, he should just leave them out entirely.

I also found the characterization of the bad guys to be cartoonish and unbelievable. The author falls back to a device of having a character who, up to the point where the fallback is employed, has been ruthless, unprincipled and greedy, then becomes unhinged, unfocused and crazy when things start going bad. Once in a book, I would find it believable. More than once goes over the line. This is not writing and characterization anywhere close to Child, Cussler or Smith. Just as the hero of a story remains fearlessly focused on the goal and strives to overcome each obstacle, even when it looks hopeless, the anti-heroes must do the same. They don’t suddenly go crazy and start muttering to themselves in front of minions or captives. They don’t wander around in circles, unable to focus. They don’t give up and run. (I’ll refer readers not to any of the authors above, but to Mark Chisnell‘s The Defender and The Wrecking Crew for a stellar example of the anti-hero.)

All of which brings me to the star of the piece, Daniel Temple. He’s your all-around hero; like Child’s Jack Reacher, he knows how to kill people and he doesn’t hesitate to do it. Unlike Reacher, Dirk Pitt or any of Smith’s Courtney characters, I didn’t find the characterization of Temple very well done and  therefore he’s not terribly interesting. By the time I had slogged through the first half of the book, I didn’t feel I knew him well enough to care much what his motives were and what he would do next. Part of my problem, I admit, was my dislike of Caroline. I understand he has to rescue her; she’s in trouble because she’s his girlfriend. I had difficulty relating to a hero figure who would get involved with a woman as insipid as I found Caroline. Aside from that, this book is a lot of telling and not a lot of showing and when an author tells about a character, I find it difficult to relate to the character (or the story, for that matter).

As for the story, the first half was a muddled mess. It’s not really about antiquities theft, the theft provides on a very thin veneer upon which the rest of the story is based. In spite of the cover, it’s also not about soldiers in Afghanistan or Iraq. It becomes more clear the second half of the book, but there are leaps and jumps in time and location that make little to no sense and many passages that add nothing at all to the story. There are many references that seemed to come out of the blue, as if the reader should know all about the person or the situation, but there is little or no prior reference. Here’s an example: at the supposed heart of the story, antiquities in the national museum in Kabul are replicated and then the originals are stolen. So nobody will discover the theft, the replicas (or the museum, I’m not sure) are destroyed. Either this destructive event is never portrayed, or it’s done so minimally as to be completely unmemorable. I would think a key component of the story would be more prominently featured. Certainly, most thrillers don’t hesitate when the opportunity to blow something up presents itself.

All in all, this was a very disappointing book. If I read the next book in the Daniel Temple series, it would only be to see if the author improves with practice.