Hotel on the Corner of Bitter and Sweet (Jamie Ford) 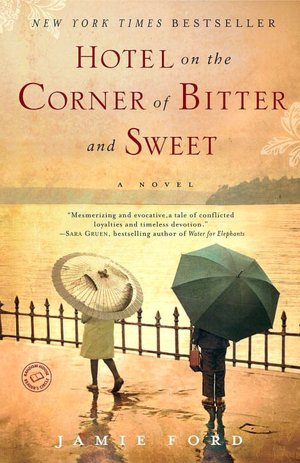 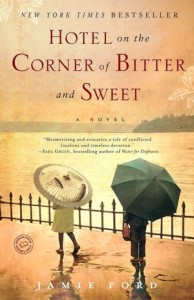 Title: Hotel on the Corner of Bitter and Sweet
Author: Jamie Ford
Available from: Amazon

That said, I loved this book and yes – it’s one of the best I’ve ever read. The tone and the way the story is told is so heartfelt and poignant. It played my emotions in a way that didn’t feel manipulative or contrived.

I love the way the author split the book between past and present. In my opinion, it was a marvelous way of playing up the bitter and the sweet in this story that also helped build the tension to the end. I felt it was an effective way to play off the relationships between Henry (the protagonist) and his father, and Henry and his son. I really don’t think this story would have been nearly as compelling if it had been written any other way.

For me, reading this, I felt a lot of pain for the characters. The story takes place in 1942 and in 1986. In 1942, the war has only made conflicts of race more acute. Henry’s father makes him wear a button that declares “I am Chinese.” As I read this story, I realized the button doesn’t keep Henry out of trouble with people who hate anyone who looks Asians, it keeps him out of more trouble with the US government in a time when Japanese-Americans are viewed as the enemy.

I thought the way Ford dealt with the removal of the Japanese to internment camps was very well done. He makes no judgments. There are no soap boxes in this story. This is a story about Henry and his family, and Henry and Keiko. It’s about love and loss and things that might have been. It’s not a political statement. And I appreciate that.

If you read this book (and obviously I highly recommend it), don’t skip the author interview at the end. I found it just as moving and interesting as the book itself.

This book is aptly titled. The story is both bitter and sweet. For me, it was more bitter than sweet, but that didn’t spoil my enjoyment. Once in awhile, I like to sprinkle sugar on a lemon and suck the juice through it.

Now about the price of this book… obviously, it’s over the range I find reasonable for an e-book, but surprisingly the e-book is actually priced just under the paperback price. Are paperback prices going up? I was surprised to find this priced at just over $10. I checked it out of my local library’s e-book selection and therefore price wasn’t a problem. If the price is a problem, I suggest a used paperback or check it out of the library because it is absolutely worth reading.