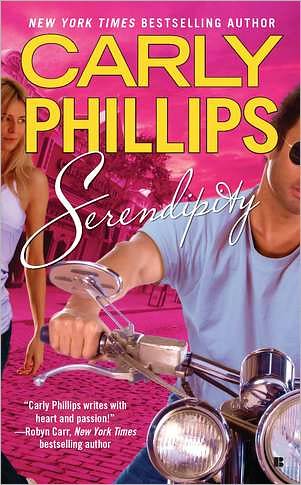 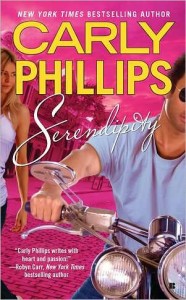 I got this book as an advanced read copy in a Goodreads giveaway.

I really enjoyed reading this book. It’s more than just a bad-boy-returns-and-makes-good-and-gets-the-good-girl story. I enjoyed watching the growth of the characters throughout the story, enough that I was glad to see the setup of some additional story lines for more books set in the town of Serendipity. If Serendipity hadn’t been good, I wouldn’t be interested in reading more about the people and the town, but I eagerly read the preview of the next book that’s included at the end of Serendipity and I’m looking forward to its publication.

Ethan returns to Serendipity to repair his past with his younger brothers, whom he abandoned when he fled town after his parents were killed in a car accident. He’s turned his life around and now he’s seeking redemption. He knows it’s going to be tough but he’s grown up and he’s willing to do whatever it takes. When he returns to Serendipity, he buys the biggest, most historic house in town, which just happened to have been owned by Faith’s family. When Faith’s father is convicted of running a Ponzi scheme, she and her mother lost their life of privilege, their home, their position and the community and the respect of the community. This is what makes this story more than a “bad boy returns” story – the tables have turned on both the main characters, and in a huge way. Ethan is looking to earn the respect he never cared about before and Faith is trying to live without the respect she always had, and it isn’t just about money. The decisions Ethan made affected his family deeply. The decisions Faith’s father made impacted her and the entire community. Faith returns to Serendipity for a new start after her marriage goes up in smoke along with her father’s fortune and position. She’s struggling to find out who she is and what she wants. She’s going to have to work for in Serendipity, because there’s a lot of animosity towards the Harringtons.

My favorite monkey wrench in this story is Tess. She’s a great character and a perfect foil for what’s going on in town, between Faith and Ethan, and between Ethan and his brothers. Her introduction into the story was a surprise, and brilliant.

I’m a sucker for a heartfelt story. There’s a lot of deep feelings in this book and the author writes it well; it’s believable and you want to know more and get to know these people more.

Definitely a good read, so thumbs up for this one!