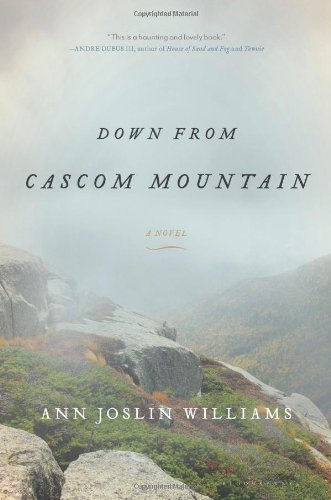 Title: Down from Cascom Mountain
Author: Ann Joslin Williams
Available from: Amazon (hardback only at this time)

I’m still trying to decide how I feel about this book. Part of my hesitation is because this isn’t the type of book I read regularly, but once in awhile I like to break up my usual with something different. Soooo…. I entered a Goodreads giveaway for this book, and I won it. In the interest of full disclosure, I never would’ve purchased this book, in paperback or in hardback or even e-book. A free read was the only way I was going to read something that’s this far off my usual beaten path.

However, I was intrigued by the Goodreads description of the book and the author, whose father is a best-selling author. The book is actual set in a fictional location in New Hampshire that was originally created by the author’s father.

Reading the description of the book on Goodreads, you can tell this is a slow-moving book, one of those stories that just kind of takes a slice of time out of the lives of the characters and exposes it to the reader. No surprise that that’s exactly what it is. And it is a beautifully written and carefully woven story. The reader may be drawn slowly into the story, but it’s a pleasant experience. It’s something like going on the It’s a Small World ride at Disneyland. You enjoy it, you have a good time – but it’s no Space Mountain and there’s no expectation that it be one.

That said, Williams shows us some pretty interesting characters. One of the things I really liked about this story is how Williams slowly gives us more detailed glimpses into the characters as the story progresses. As the story unfolds, so do the characters, bit by bit. We first see Mary as a teenager, seeing a dead boy on the trail and looking for a lost girl on Cascom Mountain, then little Tobin Gough viewed by Mary in the back seat of his mother’s car. We get a hint that something’s not right with Tobin’s mother, but that hint doesn’t come into full bloom until much later in the story. The author draws parallels between Mary’s experiences as a teenager and the experiences of the teenagers working at the guest lodge on Cascom Mountain. Mary’s path  once again crosses that of Tobin Gough, who is now a teenager and struggling with the damage caused by his mother and dysfunctional father. I enjoyed the development of Tobin Gough – I actually found him to be the most interesting character in the book and would probably read a followup that is the story of Tobin’s life.

I especially liked how Williams handled the death of Mary’s husband. It felt very real to me. There was no drama, no big buildup – it happened as I imagine many accidents happen. You know how when you experience an accident, it seems to happen in slow motion? That’s how this felt to me. I could just feel the out-of-control, slow-motion spin, but not slow enough for recovery sensation as it happens. Everything that happens after that is discovery and recovery: for Mary, Tobin and the teenagers who work at the guest lodge.

Reading this book for me was like a glimpse of summer in another place and a time long gone, even though it’s contemporary. The people on Cascom Mountain seem isolated, even if they’re only there temporarily. Everything revolves around the mountain and its wildness. Eventually, everyone gets to move forward a step; they’re better, more whole, but not completely. I found that more real than the happily-ever-after type of story, where everyone goes home healed and happy. The characters in this story aren’t completely healed, nor are they completely happy. But that’s life, right?

When you come down from Cascom Mountain, you may be changed, but the mountain isn’t. In the end, you can always go back and find the things that have always been there, and maybe find a few things you didn’t know were there, on the mountain and in yourself.