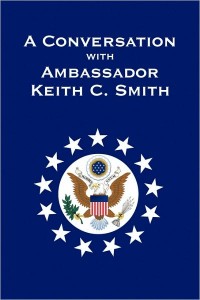 I have to disclose at the outset of this review that Keith Smith is my uncle. One thing that made it very interesting for me to read – even the dry parts where foreign policy and economics are discussed – was being able to “hear” him talking as I read, which was facilitated by the interview format of the book.

Uncle Keith lived outside the U.S. most of my life. We saw him and his family on some holidays. Reading this book gave me an opportunity to see in depth a part of his life with which I was only vaguely acquainted. He’s lived in Mexico, Brazil, Ecuador, Hungary, Norway (not covered in this book), Estonia and Lithuania, and Washington, D.C. (of course). And probably some other places I’ve forgotten.

In my opinion, the historical content of this interview is fascinating. It’s an inside look at the economic difficulties of people who struggle through political regimes that repress not only the rights of the people, but the economy of the country. It’s especially interesting to me to see the perspective from someone who lived in East Europe as these countries was struggling for political and economic stability in a post-Soviet world.

And it’s not just about the politics of the country or the region. There are apparently plenty of politics going on at the embassies themselves, of course. Always a gentleman, Keith is reticent to name and shame, but there’s plenty here about embassy politics. Not to my surprise (it’s come up at the dinner table), he takes a hard swing at political appointees. One does have to wonder why we allow individuals with no training in diplomacy, foreign politics or policy to buy their way into ambassadorships and other high positions representing the U.S. overseas.

I am, admittedly, not a political geek, but I love history and I love reading the perspective of people who are living and participating in great events. This book is a small piece of that, made more special to me because the person I’m reading about is someone I know.